If a thing’s worth doing…

|   Harrison Sapir
There are those times that you really have to think, make decisions and concentrate. And then there are times when the pieces fall straight into place and magic happens. This is one of those times: I have read and heard of the Lagunitas Brewing Company, and only in the most praising manner. Oh, the balance! … Read the rest →
Leave a comment

|   Harrison Sapir
I’ve recently been to Germany, where I felt as though I put a dent in the country’s beer reserves. I had a starry-eyed love affair with nearly every bottle or pint I drained. Many full bodied lagers and ales that all were medium to full bodied, lightly hopped and contrary to warnings from others, ice … Read the rest →
Leave a comment

|   Harrison Sapir
It doesn’t take much convincing for me to try anything from the mad men at Brew Dog. I have heard about the insane 50-60% alcohol brews, and I have sampled a few of their more pedestrian offerings that available here in the USA. To be honest, I am a sucker for a high ABV brew. … Read the rest →
Leave a comment

Did someone say Scotch? 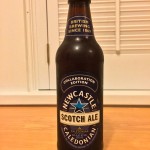 “Did you seriously just chug that beer”? Said the wife. Seriously, I did. But this beer is delicious. And an adjective that I do not throw about lightly: Smooth. When I hear something, like beer, whiskey or cigars described as “smooth,” my eyes instinctively roll. I assume that the describing party has no idea what … Read the rest →
Leave a comment
⇧